Our family spent a year and a half living in a tiny suburb of Kobe, Japan, where I attended kindergarten (幼稚園).

The last time I was in Japan, I was a child.  Our family spent a year and a half living in a tiny suburb of Kobe, Japan, where I attended kindergarten (幼稚園).

I have distinct memories of the home with its giant bathtub, two great staircases (one inside, one outside), and of the kindergarten with its giant slide.  There was also a pool we frequented, and a convenience store.  Apparently I spoke Japanese as a child, as well.

It’s been a long-time dream of mine to return and visit these places, and see what other memories might linger.

From the subtitle to the photo above, my wonderful friend Ishii-San (Yukiko) translated the kanji several years ago.  With every business in the first world online, she also found the school, Chinenoura.

picture of the front door is not familiar.  Still, finding it won’t be a problem, the website has this handy map.

As for the house we lived in, the only exterior picture, top right below, shows a wood frame.  My brother Michael, he has the better pictures of the house, the backyard and the playhouse our father built.  Unfortunately, he isn’t sharing. 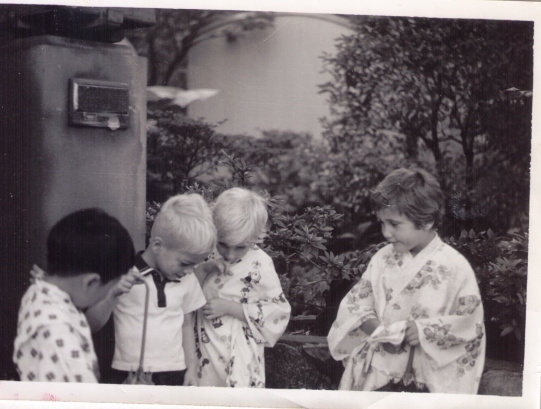 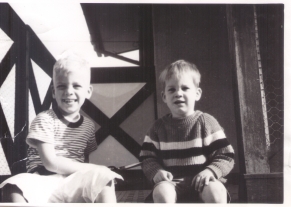 My and my little brother 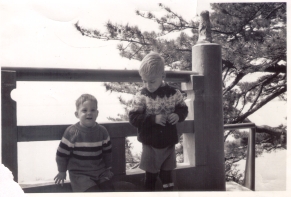 I also have this address from this meishi (名刺) that my mother carried in Japan.  This was in a scrap book along with the other photos.  The address is Akatsukayama, 1872-194 Sumiyoshi Cho, Hagashinada-Ku, Kobe City.

As near as I can determine, this address is not resolvable on Google Maps.

It’s been a long time, does the house still exist? Will I be able to find it?  What will I find, will long-lost memories surface?  Will my Japanese come back?

One thought on “Kindergarten in Japan”

Robert Cosmos: I like to travel and hike. Spent 30 years in the telecom, finance and defense industries doing data analytics, systems engineering, and operations research, among other things.