My first stop in Japan is to visit where I went to Kindergarten and, hopefully, to find the home where we lived at that time. I am searching for memories. Today, I will come to an understanding of my family roots.

My first stop in Japan is to visit where I went to Kindergarten and, hopefully, to find the home where we lived at that time.

We lived in the post-war Japan, which in the 60’s was still recovering from the devastation of the 1940’s.  With massive investment from the United States, especially the US military, Japan was on the cusp of industrializing its economy and would soon be pumping out Toyota, Honda and Datsun exports to the US and elsewhere.  Japan would soon own the auto industry and the electronics revolution.   Sony would be the king of sound with the Walkman.  This was the time of the Japanese Miracle, Japan’s economy was booming.

However, at that time, few Japanese spoke english, the cultural divide was still great. Many Japanese still resented the presence of American armed forces on their homeland.  It wasn’t even until 1972 that Okinawa, captured in WWII, was returned to Japan.  Japan had yet to invade America with its armies of Hondas and Walkmans.  Hirohito, the same emperor that presided over the pre-1940 Japanese imperial expansion still reigned, and would do so until 1989.

Today’s mission is to find my kindergarten, and the home I lived in, to walk the neighborhood, talk to people.

My Father was in the Navy, this was the reason we lived in Japan.  At that time, the nearest American base was far removed from Kobe.  We lived among the Japanese in this neighborhood of Akatsukayama.  One of the few gaijin in the neighborhood.   I have pictures to show, does anyone remember the gaijin that lived here many years ago?

The public transportation system in Japan is wonderful.   It’s even better than Switzerland, where you can set your watch by the bus schedule.  Japan has perhaps the best in the world.

My plan is to take the train from Osaka Station to Sumiyoshi Station, then to take a taxi from the Station to the Kindergarten.  The receptionist at the hotel looks at the webpage for the kindergarten and writes out the address for me.

The station is a short walk.  I have purchased a three-week JR Rail pass, so the train ride to Sumiyoshi is pleasant and uneventful.

I easily find a taxi to take me up the hill.  Giving the driver the address, he asks dono yōna basho ni ikimasu What kind of place are we going?

“Yo Chien” my cheery reply.. he kind of mutters to himself… gaijin… yochien…  I can see the wheels turning in his head…. what does a foreigner want at the kindergarten?   I explain that I went to kindergarten there, and I want to visit.  When we arrive, I show him all the pictures.  He’s very interested in my story.  There are not many gaijin in this neighborhood.

Unfortunately, there is no one to speak with at the school, it is closed.  I am able to walk around to the back and snap this picture of the slide, just as I remembered it, it must be over two meters, over 10 feet tall. 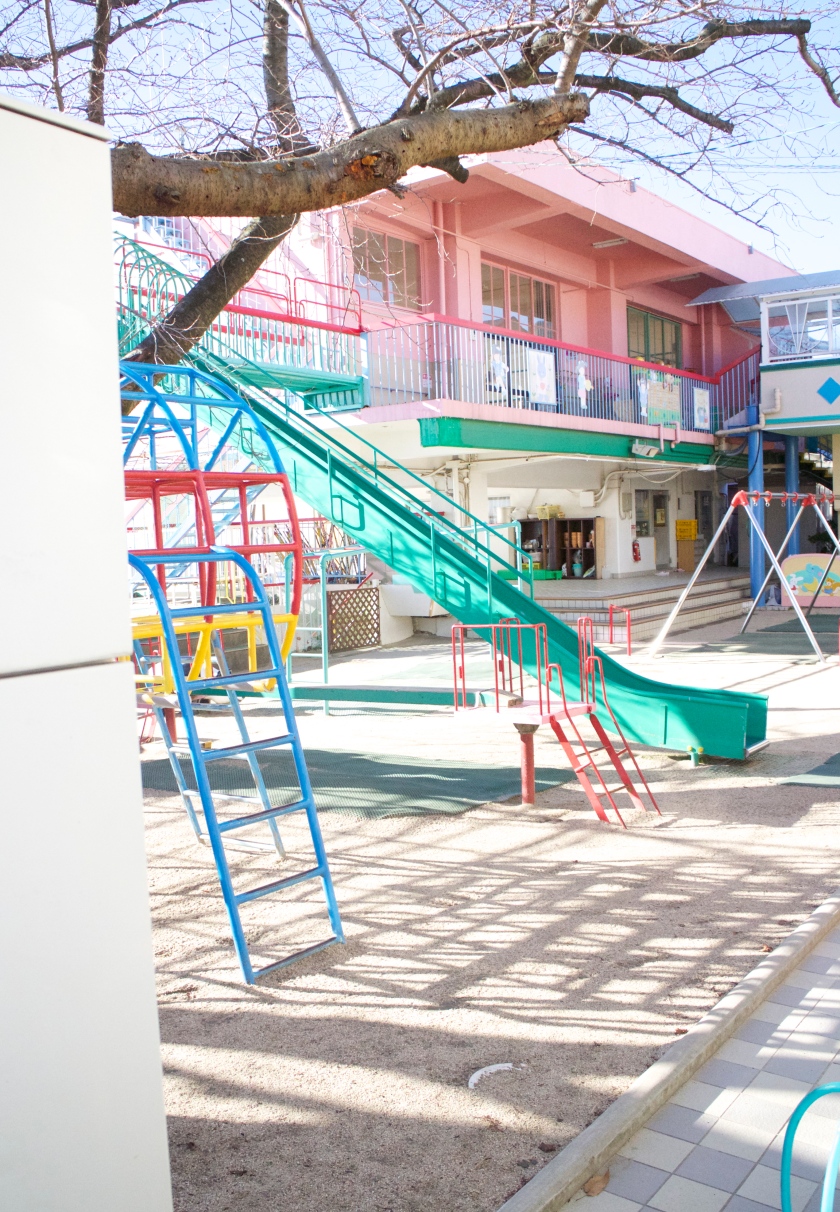 Now on to the second destination.  I pass the driver the photo of this card:

Now he scratches his head.  We drive to a place that is the Akatsukayama Busstop.  Then he starts knocking on doors.

This is as close as he can take me himself.  So, he starts knocking on doors and asking neighbors.  He shows them my card. 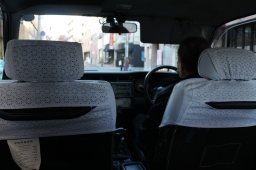 People are quite helpful… one man we spoke to waves us down a second time and shows us a map… then suggests we head to the Post Office.  What a great idea.

The people at the post office carefully review the address on the card, and they all shake their heads…. nothing doing.  Then… they start asking customers that come to the post office if they know about the location.  We all take turns looking at all the pictures I have of my family and the school as it was in the 1960’s.

The post office was a dead end.  I thank the driver.  He hasn’t been running the meter, so I give him about $20 for all his help in driving all over this mountain looking for a house that probably no longer exists.  I decide to walk for a few hours.  It’s very pleasant and the view is spectacular of the Osaka Bay.

Many of the houses in the neighborhood were clearly constructed in the last 25 years, and several newer apartment building complexes dot the area.  It’s likely that it doesn’t exist.

At the end of my walk I arrive at what looks like a small college, a lot of students are waiting for busses.  I take a taxi back to the station.  At the station, I walk through what looks like an upscale supermarket and pick up some lunch.  It’s already been a full day.

When we left Japan, my father stayed.  He would continue to work there for another year.  So, I always wondered why we left Japan.  I had only been in kindergarten.  Had we stayed another year, the Japanese language and culture.

Why had we left Japan?

I can now see that in Japan, she was a stranger in a strange land.  Far removed from familiar places, she spoke only a few words of Japanese, and few Japanese spoke english.  She must have been lonely, she took up flower arranging, and tried to have friends.  But who can have friends in a place where you cannot speak the language, or even drive a car?  I recall that my mother drove a car in Japan only one time. For some reason, it was a traumatic experience for her.

Although she tried her best, she had no idea what to do with herself, other than try to raise two small children with a workaholic husband in a strange place.

It would be familiar to the wives of salarymen today.

Robert Cosmos: I like to travel and hike. Spent 30 years in the telecom, finance and defense industries doing data analytics, systems engineering, and operations research, among other things.